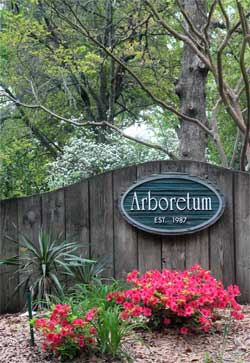 The right left path from the Azalea Walk leads to a lovely gazebo overlooking a panorama of trees labeled for identification. The arboretum features trees that can be grown in the Augusta area. This first arboretum in Augusta was established in 1987. In the future, phase II development will be in the wetland site. All trees in the Arboretum were donated in honor or in memory of someone by organizations or individuals. An expanse of lawn was seeded to give the arboretum an Old English theme.

Barbara Botts established the attractive gazebo overlooking the arboretum in memory of her husband, Bert Botts. Mr. Botts was a long-time PKP commission member and was responsible for much of the early work in the park.

The Pendleton King Park Foundation and the City of Augusta have a working partnership that has repeatedly broken new ground in the advancement of urban forestry in Augusta. The arboretum, camellia garden, and azalea walk have greatly added to the educational attributes of the park. 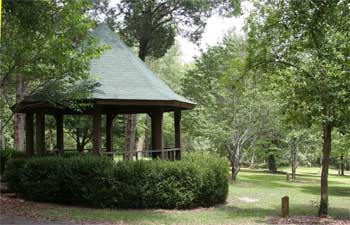