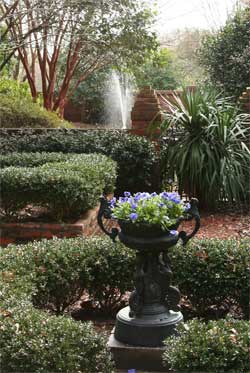 The garden has been restored with shrubs and flowers that display various hues of blue. The Green Court Garden Club has adopted this special garden and perpetuates King's love for the color blue in the landscape. The formal garden has an ornate urn which is planted with seasonal blue flowers which serves as an attractive focal point.

Mrs. Eugenia Lehmann, cousin of Pendleton King, tells of afternoon teas with her Uncle Henry and Aunt Elizabeth King. After a round golf on the plantation's nine-hole course, Uncle Henry would dress in a tuxedo for dinner. Henry donated the property in his honor as a bird sanctuary after Pendleton died at the age of 30 from a brain aneurysm.
Online RegistrationSign up online for recreation programs and activities.
Campsite BookingCreate your next outdoor adventure!
CareersExplore available career opportunities.
GIS OnlineAccess maps of Augusta online.
Calendar of EventsCheck out the City's online calendar.
Government Websites by CivicPlus®
[]