The US Army's Fort Gordon and the Dwight David Eisenhower Army Medical Center (DDEAMC) are the most prominent military presence in the Augusta area, but those important facilities are not the first installations that the United States has seen fit to place in the region. Augusta's role as host to our nation's military started long ago...

Located on land that is now part of the Summerville Campus of Georgia Regents University (formerly Augusta State University), the Augusta Arsenal produced munitions and other materials for the US military, including bomb sights during World War II. Read about the Arsenal in My Georgia History

Fact: For a short time in the early 1840's General William T. Sherman was stationed at the Augusta Arsenal, but it was military strategy, not sentiment, that caused him to bypass Augusta on his famous (or infamous) March to the Sea.

You can learn more about the Augusta Arsenal, and Augusta's history in general, at the Augusta Museum of History.

Click the following link to read about Augusta's brief tenure as a winter training school for US Army pilots during the days of the infancy of aviation. The school, which was one of several set up by the Wright Brothers, was intended to help train pilots for the nascent flying corps. Georgia Historical Marker

Camp Hancock was a military cantonment (temporary site) located on what was then the western outskirts of the City of Augusta near Daniel Field. During World War I the camp prepared National Guard troops for integration into the US Army.

The picture to the right is of troops lining up for mess at Camp Hancock. The photograph is from the Georgia Archives at: http://cdm.georgiaarchives.org:2011/cdm/ref/collection/vg2/id/13533

To read more about Camp Hancock you can follow the links below:
Camp Hancock in the Augusta Chronicle
Georgia Encyclopedia 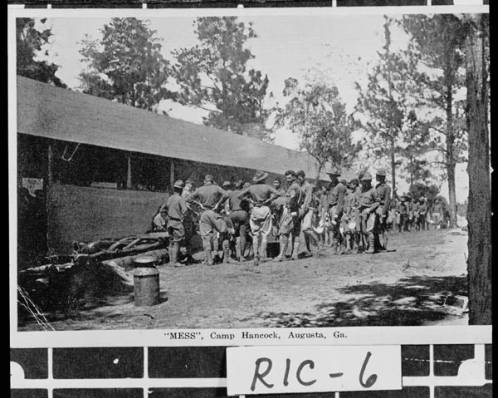 Fort Gordon, home of the US Army Cyber Center of Excellence, the Dwight David Eisenhower Army Medical Center (DDEAMC), and the US Army Signal School, was established in Augusta in 1941, prior to the Japanese attack on Pearl Harbor and the US entry into World War II. Until 1956, the name of the facility was "Camp Gordon". Fort Gordon is a vital partner for Augusta and surrounding areas, and the military is a welcome and much-appreciated member of the community.