Its leaves are thick, leathery, dark green, smooth and shiny on the upper surface, pale and hairy below. The acorn is enclosed in a cup. It has a distinct spreading appearance and was formerly used in ship building because of its large size and great strength. It grows most abundantly on rich hummocks of soil.

Quercus virginiana, also known as the southern live oak, is the official state tree of Georgia. It is the southern symbol of strength lining the historic streets of small towns. Live oak is a large spreading tree of the lower Coastal Plain from southeastern Virginia to southern Florida and to southern Texas and reaches heights of 65' to 85'.

On the Gulf Coast, live oaks often support many types of epiphytic plants (plants that grow on top of another plant but does not depend on it for nutrition) such as Spanish moss which hangs in weeping garlands, giving the trees a striking appearance.

Live oak is a fast-growing tree. It normally grows in low sandy soils near the Coast but can be found in a wide variety of sites. You can find live oak along stream banks or borders of salt marshes; along roadsides or in city lots; and commonly scattered in pastures or in mixed woodlands. Live oak is found growing in association with several other hardwoods, including the water oak, laurel oak, sweetgum, southern magnolia, and American holly.

Live oak was widely used in early American shipbuilding. Because of the trees' short height and low-hanging branches, lumber from live oak was specifically used to make curved structural parts of the hull. In such cuts of lumber, the line of the grain would fall perpendicularly to lines of stress, creating structures of exceptional strength. It continues to be used occasionally when available in shipbuilding. Live oaks were not generally used for planking because the curved and often convoluted shape of the tree did not lend itself to be milled to planking of any length.

The leaves are alternately arranged, and may persist on the tree through winter until they gradually fall as new leaves emerge in the spring. The leaves are 2" to 5" long by ½" to 2 ½" wide. The narrowly to broadly elliptical shaped leaves are usually stiff and leathery.

The upper surface is shiny, dark green. The leaves are dull grayish green underneath. The leaf base is tapering and the tip is short pointed to rounded. The margin is smooth and slightly wavy.

Sweet edible acorns are usually produced in great abundance and are of value to many birds and mammals including wild turkeys, wood ducks, jays, quail, whitetail deer, raccoons, and squirrels. They are ¾" to 1" long, broadest at the base and rounded to pointed at the tip. The largest portion of the acorns is dark brown to black and shiny but light brown within the cap that covers ¼ of the dark nut. They occur solitary or in clusters of three to five nuts and mature in one season on the current year's branchlets.

The dark brown to reddish-brown bark is thick with shallow furrows and roughly ridged, later becoming blocky with age.

The yellowish-brown wood is hard, heavy, tough, strong, and is used for tool handles, structural beams, shipbuilding, posts, and in places requiring strength and durability. It is rarely used for furniture due to warping and twisting while drying.

Live oak ranks as one of the heaviest native hardwoods, weighing 55 pounds per cubic foot when air dry. This weight or density makes live oak a good fuel wood although it can be very difficult to split. 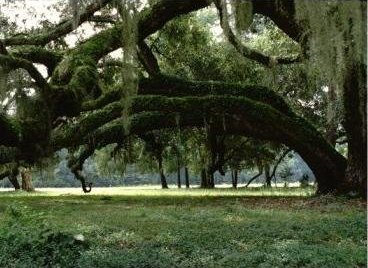 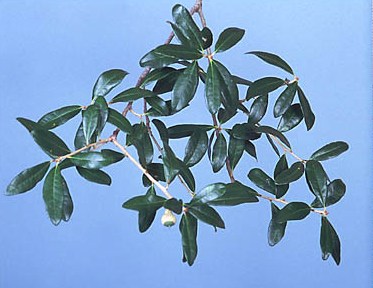 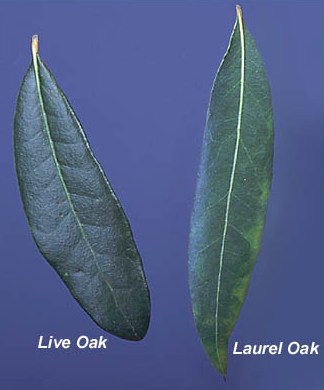 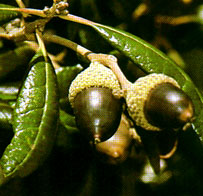 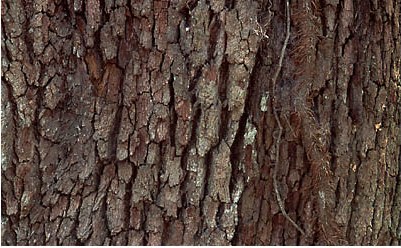